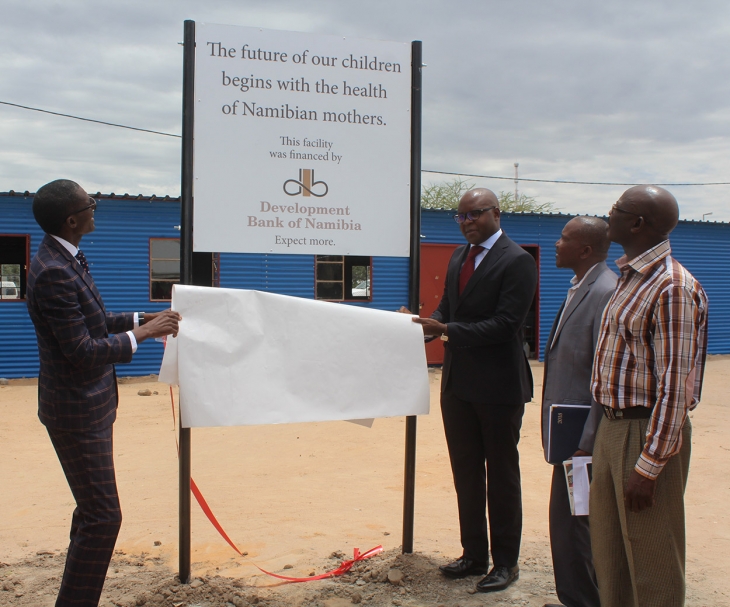 The Development Bank of Namibia (DBN) has provided accommodation facilities for expecting mothers visiting Outapi State Hospital in the Omusati Region. Valued at more than N$300,000, the facility alleviates the need for shelter for women who cannot afford accommodation when visiting the hospital for prenatal health services and care. Previously, some women seeking prenatal care slept in tents or on the ground, under trees.

Handing over the facility to the hospital, Inkumbi said that Namibia’s future is built on mothers and their care for their children and families. The Bank recognizes that maternal health is a pillar on which the future relies. To this end, the Bank made the donation to construct the facility.

Inkumbi went on to say, DBN also supports needy communicates through its CSI intervention, albeit under limited budget. The Bank’s CSI Policy has multiple targets, defined by specific fields in which the Bank seeks to make targeted interventions. These are poverty alleviation, development of education, skills development, care for the environment, community health, and activities that materially improve the business environment.

Firstly, Inkumbi said, the Bank encourages economic participation on the part of women. The Bank encourages women-led enterprises through its drive to transform the economy with finance. He added that the Bank measures approval of finance for women, and uses its figures as a benchmark for its effect. He encouraged women entrepreneurs and women-led enterprises to approach DBN with their business plans.

Secondly, Inkumbi said, the Bank treats women on its payroll equally, and with respect. As a matter of fact, women are more than men in the Bank and he added that more than half of DBN’s senior management team are women.

Thirdly, Inkumbi said, the Bank supports women through its CSI Policy, of which the Outapi facility is an example.

Inkumbi concluded by saying that women play an invaluable role in all facets of life in Namibia, and that the Bank should be seen as an enabling agency for their socio-economic development.

More in this category: « Three years to make a difference for the disabled DBN Senior Communication Manager Jerome Mutumba on DBN’s support for Cheshire Homes in Katima Mulilo Development Bank of Namibia donates for the construction of a fish dam Tilapia farming and orchard irrigation for northern women’s co-operative »

Make sure you enter all the required information, indicated by an asterisk (*). HTML code is not allowed.